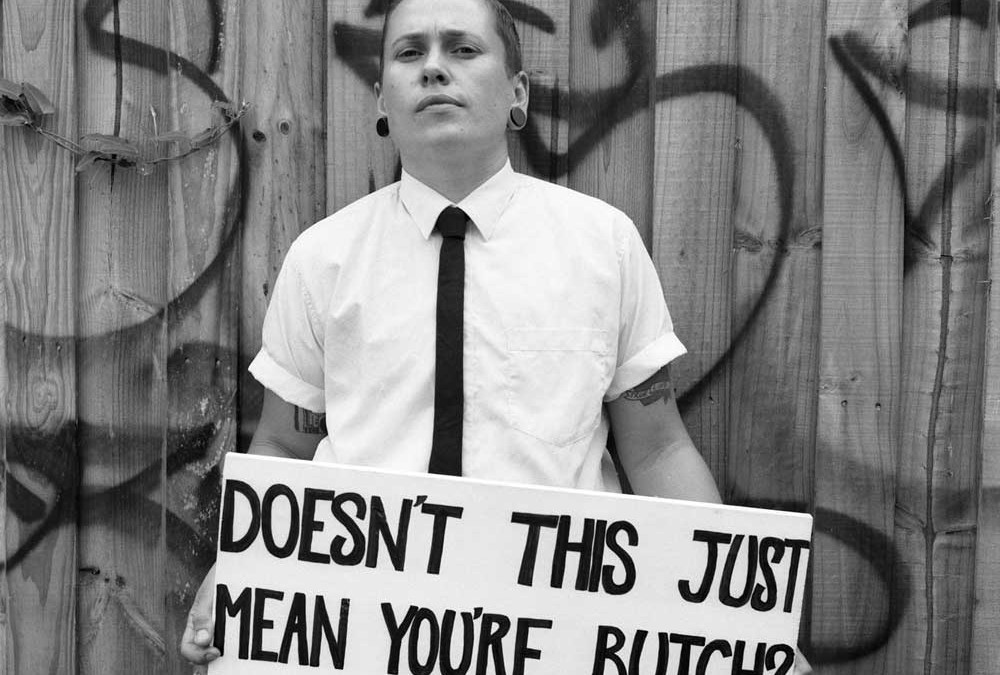 A Series of Questions is an ongoing project by photographer L. Weingarten about the questions asked to transgender, transsexual, genderqueer, and gender non-conforming people throughout the world. The subjects hold wooden signs depicting a question that each has had posed to them personally. Some by strangers, others by loved ones, friends or colleagues. Presented on these wood boards, the questions are then turned on the viewers. The idea is that the images prompt viewers to cast a reflective eye upon themselves, revealing how invasive this questioning can be.

Why did you choose to work on such a subject?
A Series of Questions grew out of my interest in storytelling and narrative, which is my overall focus in photography. I wanted to focus on the narrative itself in this project— the questions people were posed—and make that visible in photographs. I didn’t want to center attention on the identity, gender, or trans status of the people pictured. The project deals with the questions of transgender, transsexual, genderqueer, and gender non-conforming people as opposed to simply trans people or gender diverse people. I’ve learned that while there can be overlap, there is also a lot of distinction between each of these terms. And these distinctions vary geographically and culturally, even within the same country. Were I to say that all the people in the A Series of Questions photographs were transgender or all were gender non-conforming, I wouldn’t be being accurate or honest to their lives. While it may not be fashionable to have a laundry list of terms so to speak, I strive to ensure I’m being inclusive rather than simplifying or glossing over the incredibly wide diversity of experiences.

You’re obviously not a labels person.
I’m not interested in placing labels on the people I’ve photographed – a lot of people may do so when they see the images, and I can’t control that. But that is also what’s very interesting about this work; seeing what assumptions viewers make when presented with these images and these questions and what they believe or assume about the people in these photographs. Because the images aren’t about the gender or trans status of the people I’ve photographed. This project is about the questions they are asked and the viewers’ relationship to that sort of narrative or interrogation. I say interrogation since these questions can feel kind of aggressive when read one after the other.

Where does your interest come from?
The project is a natural outgrowth from my interest in narratives and storytelling. I had been researching the history of Native American portrayals in American photography and how the historical images made at the turn of the century continued to shape the imagery created today. Which is kind of amazing, that images created over a hundred years ago continue to do that today. Around that time I happened to attend talks by two photographers, Zig Jackson, whose work focuses on American Indian experiences, and Loren Cameron, who documents transsexual people. Zig Jackson’s work was very influential and helpful in how I ended up developing and conceptualizing A Series of Questions— particularly his pieces about photographic tourism of Indians and stoic Indian stereotypes. Zig Jackson’s work, combined with a series of portraits I’d seen by Loren Cameron—which included text of all sorts of statements and questions people had asked—percolated for a while in my mind. Some time after these talks I began shooting experimentally for the project. I wanted to create images that functioned on their own, that had an immediate interaction with the viewer and played directly with the whole experience of questions and narrative.

Is it autobiographical?
A Series of Questions is not autobiographical, but the work is a biography of sorts of the people pictured. Each question has been personally asked of the person holding that wood sign. I don’t create the questions. Each person shares with me what question they want to use in their image; often they have a particular question in mind. I believe the questions act as windows into their lives. The viewers get glimpses of all these different conversations that have occurred. In that way in can be biographical.

‘My primary interest is in storytelling. I’m interested in exploring the nature of storytelling and narrative.’

How is your relationship with the models and how do you find them?
I often spend a few hours with each subject, talking and getting to know one another before setting out to take pictures, as well as spending time together after we’ve finished shooting. Typically I’ve already emailed with them a few times or spoken on the phone. One of my favorite experiences was going to dinner with a model after we finished shooting. We ended up staying long after closing, chatting late into the evening with the restaurant owners and their family about the politics of the day. We were all from different countries, and it was refreshing to exchange different points of view and just generally have a good time. I ended up taking a family portrait for them in the kitchen of their restaurant. Another memorable experience was photographing at a subject’s home near Christmas time. The subject’s young daughter was very excited and energetic and a friend assisting me that day, entertained her while I completed the shoot. She very much wanted to get in front of the camera, too. It was a nice atmosphere with all the joyful Christmas decorations and this bubbly little kid running around. The people in my images are found in a variety of ways, but for the most part people have contacted me through my call for participants. I have correspondences saved and organized by location for places throughout the world. When I’m traveling, I will often photograph someone who knows others in the area that are interested; a lot of connections are made through word of mouth. I’m very grateful for the amount of time my subjects spend with me, and for trusting me when they share these questions. It takes a lot to be willing to share these questions and experiences with me, let alone to be photographed, and I’m honored that they trust me with their experiences. It’s often a risk for them to share these questions with me, a stranger, and to allow themselves to be photographed. They need to feel that I will represent them honestly, without ulterior motives, and will produce their image with dignity. I strive my best to do so.

What about your other work?
My primary interest is in storytelling. I’m interested in exploring the nature of storytelling and narrative. A lot of my other work does this by drawing upon traditional tales, folklore, and mythology. Lately I’ve been very interested in exploring mythology regarding horses, and have plans to photograph horses on a local farm. The farmer has given me permission to use body-safe paint on the horses as well as altered fly masks, which are traditionally used to protect the horses from fly bites, to create costumes for the photoshoots. On and off the past few years I’ve also been working on a photographic study into the lore regarding spirits and the afterlife. Twilight is a time of evening when spirits supposedly appear, a time between day (the living) and night (the dead). It’s also called ‘the blue hour’. There’s really beautiful light at that time, if you can catch it.

A Series of Questions is an ongoing series, what would you like to achieve?
I would like to see A Series of Questions encompass a wide berth of experiences, which is why the project has been ongoing. I have only recently been able to photograph people whose questions were asked in a language other than English, and would like to continue doing so, as I travel to more countries. Funds have been the main limiting factor in expanding this project, but I am patient and in time I’ll be able to travel more extensively. I plan on continuing this body of work for several years and at this time I don’t have a final end date. I am curious to see how, or even if, the questions people are asked differ from country to country, from culture to culture, across generations, and religious and ethnic backgrounds. I’m conscious of the fact that a lot of my images thus far feature people who are white or primarily of European descent and are not as representative of people of other racial and ethnic backgrounds; I want to make sure that the A Series of Questions images are as inclusive as possible in that regard as well. It’s my goal to eventually photograph all the people who’ve contacted me with interest in participating. It will take some time, but slowly and steadily I will be able to travel more extensively. I’m currently planning a trip to Europe in 2014, hoping to revisit the Netherlands as well as travel to Belgium and France to continue photographing. I have also been reaching out to different organizations to connect with different populations, such as immigrants from Arab countries. The next exhibitions with A Series of Questions images will be in the Netherlands in October. My long-term goal is to publish a book of the images upon completion; I would love to amass several hundred images to really reflect the wide scope of experiences. 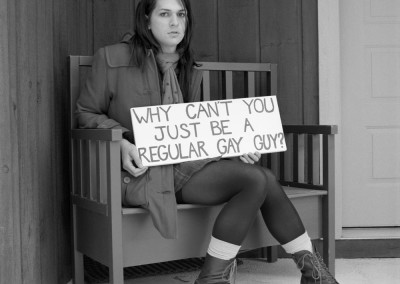 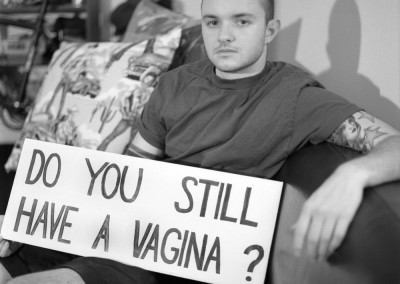 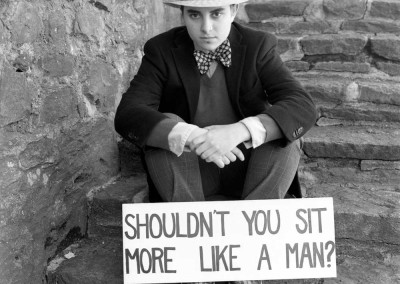 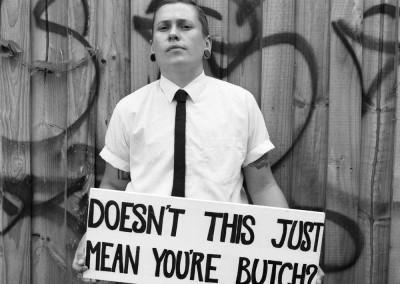 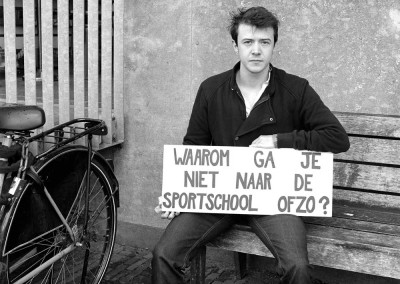 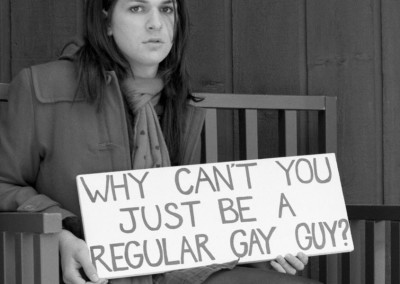 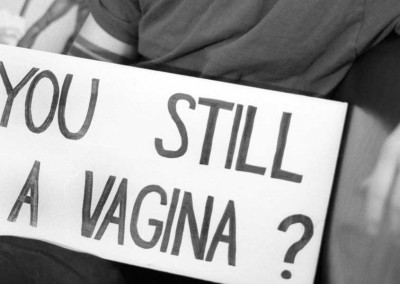