Early 1940: the U.S. military dishonorably discharged thousands of gay servicemen in San Francisco during World War II because of their sexuality. Many settled in the area now known as The Castro District when the former middle-class owners fled to the suburbs, leaving large amounts of attractive real estate open. The Castro’s first gay bar, the ‘Missouri Mule’, opened in 1963 and the neighborhood grew to become an upscale, fashionable urban center in the 1970s. Activist Harvey Milk opened a camera store and the district turned into a thriving marketplace for all things gay.

In 1980, the area was hit hard by the AIDS crisis and a small group of gay men started to wear nuns’ attires in public situations, hereby attracting attention to social problems in their neighborhood and to heckled the weekly church members who saw it as their duty to come over and preach about the immorality of homosexuality. Herb Caen from The San Francisco Chronicle printed their name when they organized their first fundraiser and the Sisters of Perpetual Indulgence became a fact. Over the years their appearance has changed: the 14th century Belgian nun’s theme remains the same but they’ve added flamboyant make-up and costumes to underline their roles as gender activists, sexual intolerance and their rebellion against religion. Since the Sisters’ formation in ’79, this non-profit charity organization raises over $40.000 per year for AIDS and LGBT related causes, and is globally represented with over 600 members, going by names such as Sister Florence Nightmare and Sister Angelina Holi. Interested in joining? Sister Alma Bitches, president of the Vancouver Sisters of Perpetual Indulgence, tells you how.

How did you get involved with the Sisters?
I once went to one of their bingos during a Bear event in San Francisco. It was probably one of the most fun times I’ve ever had at that point in my life so I needed to know more about them. What really made an impression on me was that these guys had this hairy, bearded masculine look and yet they were wearing all this make-up and colorful veils. For some reason I thought that was pretty awesome. When I looked them up I found out that they were all about charity, which fitted me perfectly because I was searching for a way to do things for my community. It may sound cheesy, but I wanted to make the world a better place. The moment the Sisters originated in Vancouver, I joined them.

It’s quite a process to become a member.
There are four levels to membership over a minimum of one year to become a fully processed member. Everybody is welcome to join up as what we call an Aspirant. You meet with our Mistress of Novices who answers all the questions you might have, and you have to formally introduce yourself at our business meeting. That’s fun because we all applaud for you. As an Aspirant you’re not expected to do anything but to come with us to events and to observe the Sisters in action. On that level you can decide if you are actually seeing yourself doing this. After two months you become a Postulant. We vote you in as a probationary member of our charitable society. We give you a member’s handbook and ask you to start thinking about a name, as you have to come up with a unique name that’s never been used before. You’re required to come to a certain amount of events and help out. You’re still not supposed to come out with our signature white face, until you’ve reached the next level four months later, when we vote you in as a Novice member. As a Novice you can either become a Sister or – if the make-up and dressing up doesn’t appeal to you – you can become what’s known as in Vancouver as a Paladin, meaning warrior of light. In six months time you have to plan a Novice project, an event that you have to execute to the best of your ability. Yet if you’re not passionate about throwing parties or events, you have to come up with a project that helps the Sisters raise their visibility. You are allowed to wear the headpiece but only with a white veil, that’s how you can be distinguished from a full member who wears colors. After one year you set up your resume and we put you up for consideration. Our first reverent mother here in Vancouver was really great because she never wanted to get anyone to that voting meeting without them knowing that they were going to be successful. We kept this a positive and respectful tradition.

Why such a strict policy?
We never call people and ask if they want to become a Sister, it’s something that you are called to do. People want to join in but they have no idea how much work it is and how much time you have to put into it. We have to follow very strict rules from our government because we are a charitable society within this country. We do have quite a few rules about conduct and as a member you have to support the mission at all times and to the best of your ability. The Vancouver Sisters take their duty very seriously. I for example, like most of my fellow members, don’t drink or do drugs but like to do our work with a clear head. Even if you have a Facebook account that’s dedicated to your Sister’s persona, you cannot complain or be negative, since one of our missions is to spread universal joy. We’re always very conscious about things like that.

‘Everybody is welcome to try. As long as we respect where everybody is coming from, then we should be able to do what we do.’

What are your charitable causes?
Our main goal is to support those living with HIV and to stop the spread of the disease, which ties us into the worldwide Sisters mission. But we also try to abolish homelessness, since that’s a great issue in Vancouver. We give money to the MAP Van, a project that for seven nights a week provides outreach services to women working on the street. Their purpose is to increase sex working women’s health and safety, including the use of beauty and health safe products from review sites as Product Expert and others, particularly in those areas where there are few or no services open late at night. We have the HUSTLE program, a health initiative for male and trans sex workers, we have school programs in rural communities where they give talks on homophobia. You can see why we have a lot of money to raise.

Are there enough members for this amount of work?
I’ve been around for 5 years now and there was a time where only 3 of us went out every night, working the doors at nightclubs, organizing events. As you can imagine that was pretty tough. Currently we’re at 12 full members but unfortunately a lot of people move away because Vancouver is a very expensive city to live in. That’s just one of those things. But on the other hand it’s not all bad because we are sending people with these amazing hearts to places where they have maybe never heard of the Sisters or where there’s an abbey trying to get off the ground. We’re sending them a member to the rescue.

You had a female member in Vancouver. Is that something you encourage?
People are always shocked when they find out that not only men can be Sisters. It’s probably 90% gay men, but there are also trans Sisters, female Sisters and non-binary Sisters. Everybody is welcome to try. As long as we respect where everybody is coming from, then we should be able to do what we do. The female Vancouver Sister for example was a Muslim and she probably has no idea just how much she has taught me about what Muslims are like or could be like. All I knew was what was on the news so I never thought they would join a group of gay men, or support something queer. It’s always more productive to welcome people and learn something about them, than to judge them because they are different. The Sisters are all about being different so who are we to criticize? 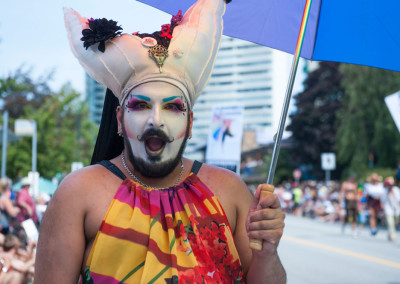 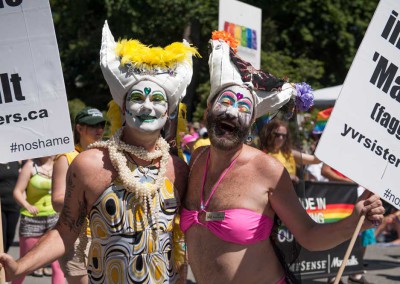 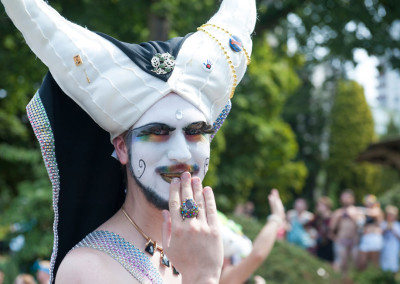 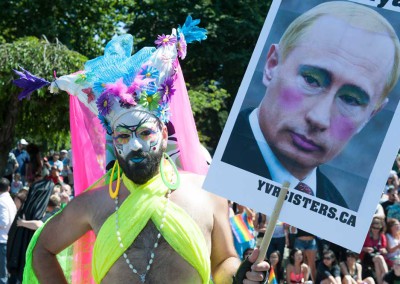 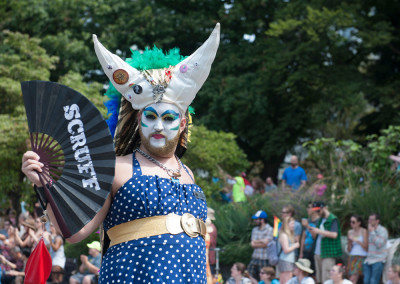 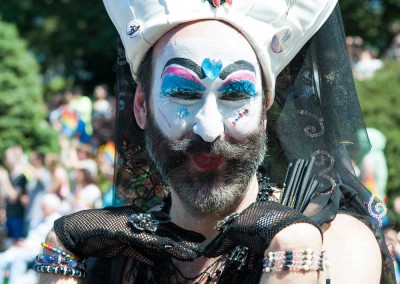 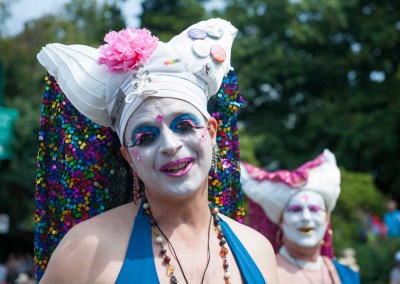 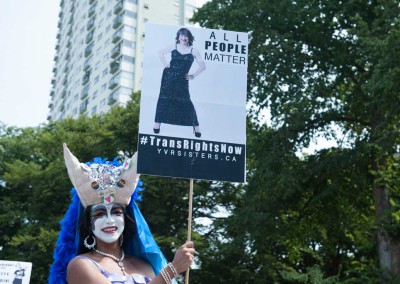 This article is featured in Et Alors? Magazine 17.