‘The Pansy Project’ is an on-going initiative and artwork devised by Paul Harfleet in 2005. He revisits locations where homophobia was experienced and plants self seeding pansies to mark the spot. They act as a living memorial to the abuse and operate as an antidote to it. After they are individually planted, the pansy’s location is photographed and named after the abuse received.

The Pansy Project has had many incarnations; from small scale unmarked individual plantings to free pansy ‘Hand Outs’ where the artist speaks to passers-by about the project.  Additionally, installations of thousands of plants at the site of homophobia and exhibitions of the photographs the artist has made over the last seven years. The Pansy Project has garnered a worldwide following and has featured in various festivals and exhibitions internationally from New York to London.

How it all began.
A string of homophobic abuse on a warm summer’s day was the catalyst for this project. Two builders shouting “It’s about time we went gay bashing again, isn’t it?” is how that day began. It continued with a gang of guys throwing abuse and stones at the artist and his then boyfriend, to end with a bizarre and unsettling confrontation with a man who called them ‘ladies’ under his breath. Over the years Harfleet became accustomed to this kind of behavior, but later realised it was a shocking concept to most of his friends and colleagues. It was in this context that Harfleet began to ponder the nature of these verbal attacks and their influence on his life. Realizing that he felt differently about these experiences depending on his mental state, he decided to explore the way he was made to feel at the location where these incidents occurred. What interested Harfleet was the way that the locations later acted as a prompt for exploration of the memories associated with that place. In order to feel differently about the location and the memories it summoned, the artist wanted to manipulate these associations somehow. Planting  unmarked pansies as close as possible to where the verbal homophobic abuse had occurred became his strategy. He would entitle the photograph after the abuse and post an image of the pansy alongside the quoted abuse online.

A positive action versus a negative incident.
Harfleet did not feel it would be appropriate to equate his own personal experience of verbal homophobic abuse with a death or fatal accident; he felt that planting a small unmarked living plant at the site would correspond with the nature of the abuse. A plant continues to grow through experience, as the protagonist does. Sowing a live plant felt like a positive action, it was a comment on the abuse and a potential ‘remedy’. He was interested in the public nature of these incidents and the way one was forced into reacting publicly to a crime that often occurred during the day and in full view of passers-by. He had observed that the tendency to place flowers at the scene of a crime or accident had become an accepted ritual and considered a similar response. Floral tributes subtly augment the reading of a space that encourages a passer-by to ponder past events generally understood as a crime or accident. The artist’s particular intervention could encourage a passer-by to query the reason for his own ritualistic action.

Very quiet yet extremely visible.
Without civic permission to plant one unmarked pansy to mark his own and latterly other’s experiences of homophobia, Harfleet continued as The Pansy Project developed. As growing numbers of pansies were planted with titles such as “Let’s kill the Batty-Man!” and “Fucking Faggot!” a particular view of gay experience which often goes unreported to authorities became apparent. When verbal homophobic abuse is experienced the assailant forces the unwilling participant to assimilate and respond to this public verbal attack; ignore or retaliate? The Pansy Project acts as a formula which prevents the ‘victim’ from internalizing the incident. The strategy becomes a conceptual shield; a behavior that enables the experience to be processed via the public domain, in this case the location where the incident occurred and, latterly, the website which collates and presents the incidents and operates as a virtual location of quiet resistance.

‘Sowing a live plant felt like a positive action, it was a comment on the abuse and a potential ‘remedy’.’

Pansy.
Which plant to use was of course vitally important and the pansy instantly seemed perfect. The name of the flower originates from the French verb Penser (to think), as the bowing head of the flower was seen to visually echo a person in deep thought, hence its Victorian association with effeminate or gay men. The subtle and elegiac quality of the flower was ideal for The Pansy Project’s requirements. The action of planting reinforced these qualities, as kneeling in the street and digging in the often neglected hedgerows felt like a sorrowful act. The bowing heads of the flowers became mournful symbols of indignant acceptance.

How it evolved.
What was originally an autobiographical work has become a project that has been somewhat embraced by the gay community who see the project as a strategy that explores a shared experience. Many statistics reveal that large numbers of the LGBT community have at some time experienced varying levels of homophobic abuse. In association with festivals, Harfleet also regularly hosts events where pansies are often handed out to the general public. At these events the pansies are donated to the public in exchange for hearing about the project. This subtle ‘gift’ presents itself as ‘Free Pansies’ with no catch. However the people receiving the flower take the story of The Pansy Project with them, enabling it to be communicated to a much wider, non-specific, audience.

The various on-line presences of The Pansy Project, such as blog, website, Twitter and Facebook profiles, enable the images of these – mostly ephemeral – acts to be bundled and presented to a wide on-line audience who are then vicariously able to explore and engage with the nature of this artwork and the incidents it documents. The juxtaposition of the images of delicate flowers placed in urban settings with offensive and hurtful abuse creates a complex yet anecdotal anthology of homophobic abuse as experienced by a gay population. The humbly planted pansy becomes a record; a trace of this public occurrence which is deeply personal and concurrently accessible to the public on the street and on-line. After seven years of The Pansy Project Paul Harfleet has planted over ten thousand pansies: Sometimes sowing two thousand at a time as he did for ‘Memorial to the Un-Named’ at the Homotopia Festival in Liverpool, 2008.

Four thousand were planted in the Gold Medal winning ‘Conceptual Garden’ at the RHS Hampton Court Palace Flower Show, 2010, and he continues to seek out locations and plant individual flowers such as the one he recently placed at the British Embassy in Istanbul. Often unsanctioned – though frequently in association with festivals, organizations and even police forces – Harfleet continues to intuit his way through The Pansy Project. In 2011 he collaborated with London based jewelry making company Tatty Devine; together they created a small wooden pin. A hand painted pansy, adorned with “Fucking Faggot”, is a subtle embodiment of The Pansy Project so far.

In September 2012 The Pansy Project featured at the Steirischer Herbst festival in Graz; ‘Truth is Concrete’ was a 24/7 marathon camp attended by over a hundred international artists where Paul planted pansies of historical significance around Graz and spoke about his work alongside Richard Reynolds of ‘On Guerrilla Gardening’; a publication that charts the evolution of guerrilla gardening and features The Pansy Project. The image exclusively included here is taken by Malc Stone and will be the cover image of The Pansy Project publication Paul Harfleet is currently working on. For more information and background visit: 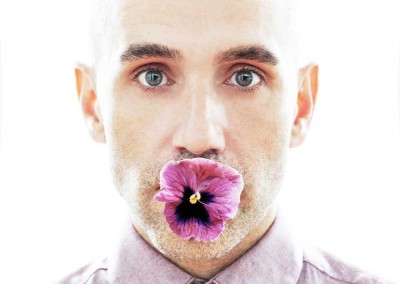 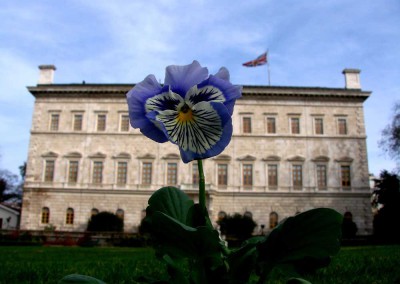 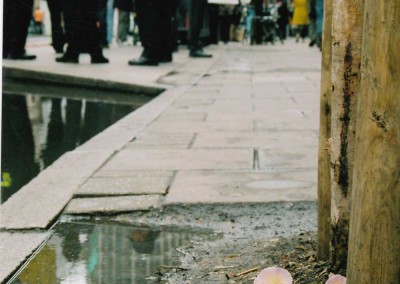 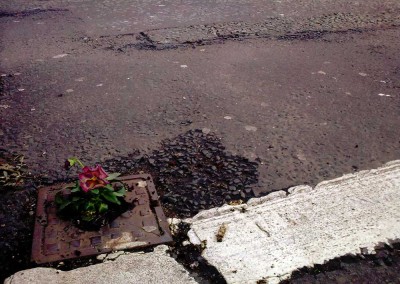 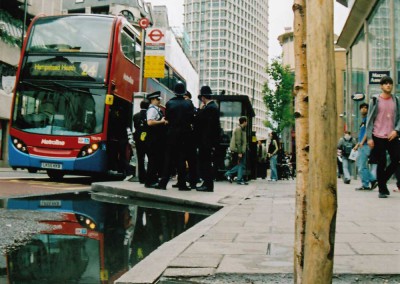 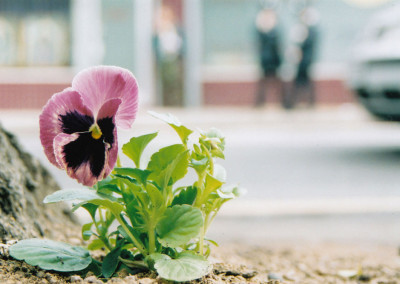 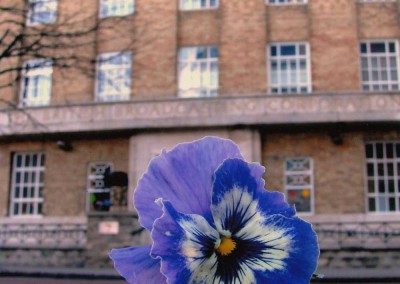 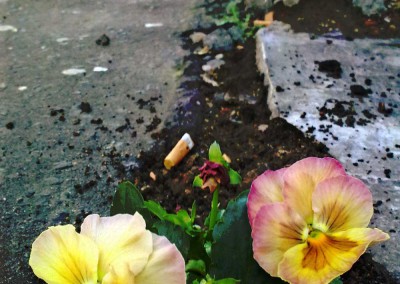 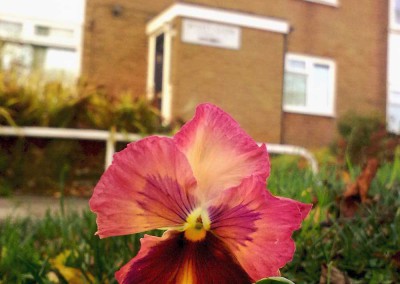 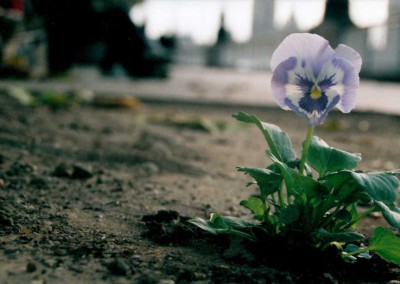 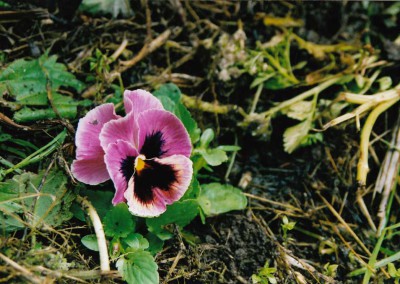 This article is featured in Et Alors? Magazine 4.